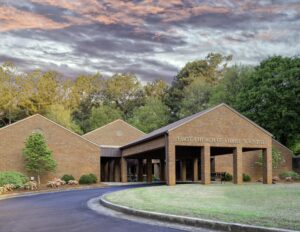 In 1979, a small group of individuals dedicated to the teachings of Christian Science began to hold church services on Canton Street in Historic Roswell. This became the Christian Science Society, Roswell, Georgia, in January, 1980. Becoming a society is the first step toward becoming a branch of The Mother Church in Boston.

In 1985, we fulfilled the requirements to become a full-fledged branch of The Mother Church. In March of 1990 we completed our current edifice at 10920 Houze Road.

Click here to read an interesting history on our Church, including the dedication of this building.

First Church of Christ, Scientist, Roswell Georgia is a loyal branch of The First Church of Christ, Scientist in Boston Massachusetts, also known as The Mother Church…”designed to be built on the Rock, Christ; even the understanding and demonstration of divine Truth, Life, and Love, healing and saving the world from sin and death; thus to reflect in some degree the Church Universal and Triumphant” (Church Manual by Mary Baker Eddy).

The First Church of Christ, Scientist, Boston, Massachusetts (The Mother Church)
The official church website with links to Periodicals, The Christian Science Monitor and other church related sites. website: Christianscience.com

Christian Science Periodicals
These periodicals were all founded by Mary Baker Eddy. They are ably edited and kept abreast of the times by a team of qualified editors at Church headquarters in Boston. Hear from modern Christians how their lives have been transformed and healed. All publications are available through our Roswell Christian Science Reading Room.

The Christian Science Monitor
This international news organization delivers thoughtful, global coverage via its weekly magazine, daily news briefing, email newsletters, mobile site and website. The original daily print edition and all its contemporary derivatives were designed by Mary Baker Eddy to spread undivided the Science that operates unspent. The object of the Monitor is to injure no man, but to bless all mankind.
WEBSITE: www.csmonitor.com

The Mary Baker Eddy Library
The Library opened in 2002. It is home to interactive exhibits and displays that explore the life and achievements of Mary Baker Eddy. This New England woman defied conventional 19th-century thinking to become an influential religious leader, author, teacher, healer and founder of The Christian Science Monitor.
WEBSITE: www.marybakereddylibrary.org

Webster’s Dictionary defines the word “Dedication” in part as “complete and wholehearted fidelity.”

In 1979 with complete and wholehearted fidelity a small band of five Christian Scientists from the Greater Roswell community started an informal group. They began holding services, including a Sunday school, in an apartment clubhouse.  Six months later the clubhouse was no longer available, and they were invited to hold services in a member’s home.

As they faced personal challenges, the members decided to discontinue services temporarily, and dedicate themselves to prayer for the church. They engaged a Christian Science practitioner and met with her once a week to prayerfully consider the spiritual purpose of church.  Then they were led to begin services at another apartment complex.

It was exciting to see how divine Love met every need as it arose. A small spinet organ was donated. An organist and soloist showed up. A couple pledged to contribute $100 a month, which gave us just enough to make an offer on the house at 1116 Canton Street, Roswell, which we had considered before, but could not afford.

The owner had already turned down two offers for the same amount.  However, when she was told of our offer, she went into the next room, got down on her knees, and asked God if she should sell her home to Christian Scientists.  God said, “Yes!”

Again every new member provided the precise expertise that was needed at the moment. A young man, who was a real estate lawyer, offered to do the closing at no charge. Another attendee gave us the money to pay for the survey and title insurance. The purchase was complete in October, 1979.

On moving in, we learned that the building was a pre-Civil War schoolhouse. There was much work to be done, but the members pitched right in, spending their weekends stripping wallpaper, sanding, scrubbing and painting.  One family volunteered to repaint and refinish the pews, which we had bought second-hand.

One visitor remarked that it was just like going to church in the “Little House on the Prairie.”

New families with children kept on coming and Sunday School teachers would show up to meet that need.

We became a Christian Science Society in January of 1980.

At this point our members prayed with this verse from Isaiah,

“Enlarge the place of thy tent, and let them stretch forth the curtains of thine habitations; spare not, lengthen thy cords, and strengthen thy stakes.”

One of the ways we enlarged our tent was to reach out in prayer for the children of the world.  We asked the membership to spend five minutes each day in prayer for the world’s children.  Immediately, there was a new willingness to embrace the children in every activity of the church. During the next few years one member became a foster mother. She brought many children to our Sunday School, who had an immediate need to know that God was indeed their loving Father-Mother.

Subsequently, two children from India, four from Korea, and four from Russia came to our Sunday School, literally fulfilling the command from Isaiah,  “Bring my sons from far, and my daughters from the ends of the earth.”

Our Sunday School continued to outgrow the space provided and overflowed into the Reading Room, and often out into the yard. When anyone would complain of the cramped space, other members would respond with a line from Nehemiah, “Let us rise up and build.”

We also responded to this challenge metaphysically. Each member was given seven sheets of paper, each with one of the synonyms of God on it. They were to write the qualities of God that each synonym represented and which they wanted our church to reflect. One member combined all these qualities and at the next metaphysical meeting gave each member seven sheets of paper filled-up-full. We were asked to post them in a prominent place our home (like the refrigerator), and live these qualities day by day.

Today we can state with certainty that First Church of Christ, Scientist, Roswell is built in the hearts and minds of its members. 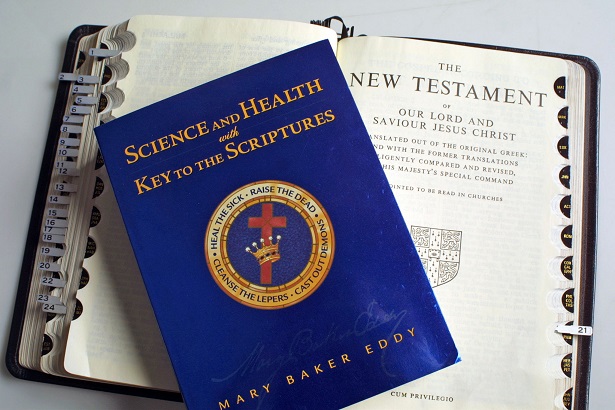